On holiday in a train 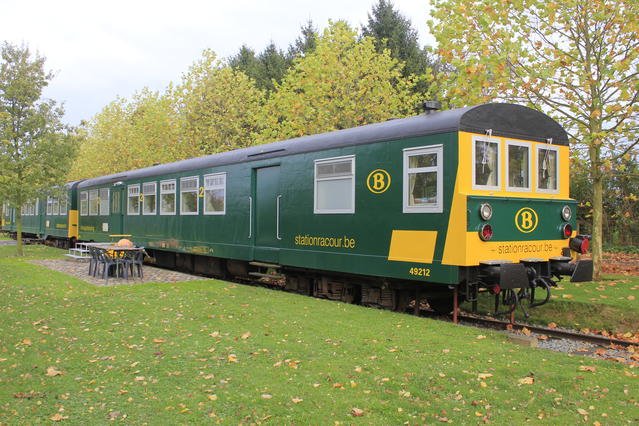 On holiday in a train

On the reconstructed railroad at the station of Racour, we placed two M2 railway carriages which were in service on the Belgian railway network until 1990. After renovating the outside of the carriages, we converted the inside into comfortable train holiday flats granted four stars.

At the outside the carriages were sand blasted and repainted in their original colors and the windows and entrance doors were renewed. At the inside the vehicles were first stripped completely, next isolated and finally refurbished with new interior walls. Further a heat pumping system ensures that the train can be heated or cooled to a comfortable temperature.

Building on the old structure of the train, each carriage was arranged as a spacious (61.5 m²) holiday flat for six persons.

Where the passenger entrance used to be, you now find an entrance hall with cloakroom and toilet. By passing through the well equipped (cooker, combo-oven, dishwasher, refrigerator,...) kitchen you reach the living room, where you find an old original train seat/bench complete with luggage rack which we restored to its former glory. On one side of the bench you have the train dinner table and on the other you have a sitting area (also made from old train seats) with a TV and DVD player.

At the front of the carriage where the cab and luggage compartment used to be, you now find a large bedroom with two single beds and one bunk bed. You also find there a small bathroom with sink and walk-in shower. The two single beds offer a nice view over the rails.

At the back of the train, the former passenger compartment was converted into a second bedroom for two with one double bed. It's equipped with closets and the same small bathroom as the other bedroom.