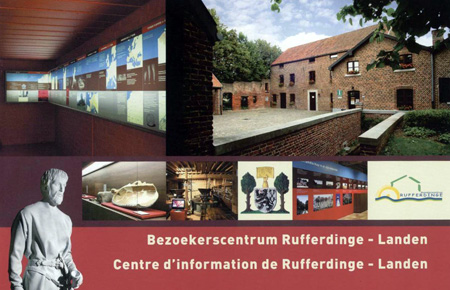 The restored water mill Rufferdinge of the city of Landen was transformed into the regional visitor’s information point. A multimedia cinema and tourist office can be visited for free.

The museum provides information on the working process of the water mill while you also get to know Pepin of Landen, the ancestor of the Carolingian dynasty.

In a short distance of the station you’ll be able to visit different interesting and historical cities by bike, each of them with its own characteristic sightseeing highlights. You can e.g. visit Tienen with its famous sugar museum and its municipal museum “Het Toreke”.

The small city of Hoegaarden invites you to a walk through the “Tuinen of Hoegaarden”, generous gardens cultivated according to different themes, where you can enjoy the world famous white beer on a shady terrace.

Next to Zoutleeuw with its historical magnificence is the nature preserve “Het Vinne” with the biggest lake of Flanders. On your way to Sint-Truiden you can first try the so called “Bink”, which is brewed in the brewery of Kerkom, before you visit the abbey of Trudo in Sint-Truiden, which was the basis of this medieval city.

It’s worth to get to know the city of Borgloon, which is known as the pearl of the Haspengouw, and if you want to learn everything about the past of Belgium’s oldest city Tongeren, you should visit the Gallo-Roman Museum in Tongeren.

The train station of Racour is directly located on the border of the two language communities Flanders and Wallonia. . Hence, you might also consider taking part in one of the extensive number of cultural activities to do in the Walloon Region.

The picturesque village Racour is characterised by its Roman- Gothic church of the 14th century and you can even visit the small museum there.

At the castle of the nearby village Helecine you can discover the provincial domain which delights the children with a varied adventure playground and where people can enjoy Helecine’s fauna and flora for hours in a 28 hectare big landscape.